Reliving Legends
Nothing is more fun than reliving experiences from Greek Myths as being a mighty Hero, and nowhere is this more prevalent than some of the branding strategies and naming of the major players in the Bitcoin industry, as well as the Industry itself. In fact, the whole system is downright archaic! For people who enjoy the medieval side of life, Bitcoin becomes a natural addiction. Many of these yearnings stem from childhood stores such as King Arthur and The Legends Of The Round Table, and Europe’s most famous Epic Beowulf. Beowulf, the Dragon Slayer is famous for his noble quests, as well as Sir Lancelot, Gawain, and many other legendary heroes.

Weird Memes Surface
Many of these myths and fables can easily be recalled when surfing through the Bitcoin scenery, as well as a ton of other memes that can come to light, making the trading, mining, and exchanging all the more fun. Some of the really, really enthusiastic people are getting amped for the new Star Wars Episode VII: The Force Awakens Movie and buying “Litecoin” and “DarkCoin” depending on which side of “The Force” they are on. Some of these movie critics are also saying the new Light-Sabre is modeled after King Arthur’s Excalibur that he pulled from the stone because of a curse from Merlin and Guinevere to maintain the Sword’s power, and others are saying that the new Light-sabre design could be adapted to work as a propulsion jet-pack with a spacesuit! Besides being labelled as a Crypto Currency, and having new banks spring up to lend money, currencies, and other assets to help people who have problems finding money with traditional banks makes it more chivalrous in many senses of the word. 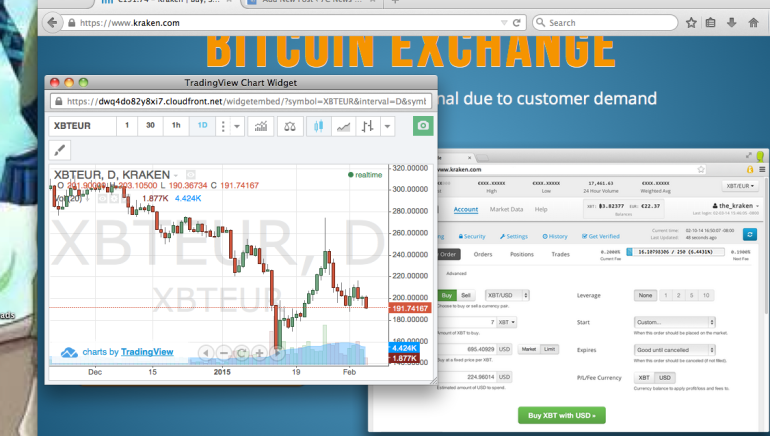 Kraken My Wallet In Half
What really got me attracted to the hospitality of the coin were all the tip jars with random wallets posted so surfers could leave a tip. Being a hospitable person, I often thought I would like to get some Bitcoin just so I could leave these guys a tip for having such a nice site, and finally I made my first purchase and bought some coin. It took me 6 months of watching it before I actually bought any. I bought in at $560 CAD per coin, which is about three times it current market value, and I lost those two coins in an investment in a website that took my money and ran, but that made me more determined than ever to get back to making some money and saving up for my next coin. Within days I have sold some of my stocks and assets and had come up with a cool $700 and put that right back into Bitcoin, this time fetching a couple coins at the lower rate, and I realized I was addicted to trading Bitcoins. Between the mythology and heroic aspects of the websites, the supervision of the machines to do the bitcoin mining, blogging, and trading on the Seventh Continent, I realized that Bitcoin had changed the way I lived. With less dependency on traditional money, and most of my shopping being done on the internet, it feels more medieval in some ways, but the chivalry and hospitality are still there!

Bringing Back A Kraken
Besides being completely archaic in its branding, the currencies, commodities, and coins provide a great bridge to reawakening some of the mighty legends of yore, and each time I surf by a Kraken it still gives me the shivers! Check out the http://www.kraken.com for a trading experience that offers more cross-functionality than you can shake a stick at!!