The Bitcoin Movement is ON.

After surfing through some posts from last year, like when China was cracking down on its buyers, just over a year later, we are seeing countries all over the world pouring millions of dollars into these liquid currencies, especially China and Japan, Thailand, and Indonesia:

This is on the heels of a series of resolutions who had come forth with some of their schemes about how to integrate Bitcoin, and it looks like the world is finally cooperating on something, which so far appears to be for everyone’s benefit?

Is the answer to world peace to stop the wars? Well, it might be a start, and if it doesn’t start world peace, then it might be able to stop some of the starvation and homelessness, since some of these coins seem to be available to even the poorest of citizens. Getting these currencies into the societies and economies is about as easy as operating a smart phone or device on a network, since essentially everything operates in a cloud system.

BITCOIN NEEDS TO INCREASE ITS VALUE

If there is anything speculation that should happen anytime soon, it should be to wish for a sharp increase of Bitcoin usage across the globe, to truly test the system to see if it is even capable of handling world-wide volume. If it can’t handle the crowd, then there is no reason to make it so integrated with all the online systems. Unless of course, the whole process is a test, and then who knows where the price will go. Until then, it is just day to day trading across the board, with today’s top mover being LiteCoin (LTC — increase of over 20% from 1.45 to 1.81, and Bitshares just in tow at 18%). 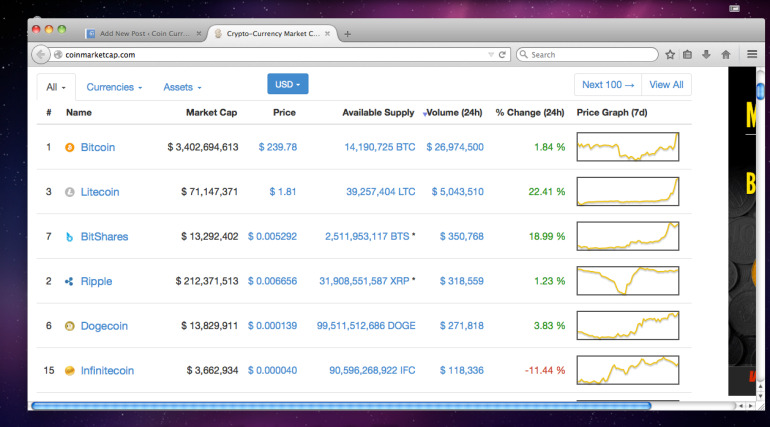 Problem: COVID-19 relief measures are costing billions of dollars and sinking the economy. Solution: Acquire the Teen Coin reserves (12,000,000,000 Coins / 88% stake) and seed it to the mass-public by adding a button in the government website that allows citizens to enter their Ethereum Imtoken Wallet Address in an email form, and then they […]