For anyone that invested in Dealcoin and missed the update, here is the announcement from Hakim, who has provided the update that Anonymous Ads will be transitioning into the Dealcoin fund.

Thank you for your support since the launch of the Dealco fund on Havelock Investments in September 2013.

Despite my best efforts over the last couple of years, it is now clear that Dealcoin, as a person-to-person bitcoin exchange, has not managed to become a serious contender to more established competing exchanges.
My professional engagements and activities in supporting young companies in the Bitcoin ecosystem are preventing me to allocate the necessary resources to reverse the trend at this time.
I have therefore decided to reach an agreement with a growing full bitcoin business led by talented developers, an online advertising platform called Anonymous Ads (http://www.a-ads.com).
The main objective of this deal is to make sure you will continue to receive dividends through the Havelock Investments platform and will still have the opportunity to benefit from the potential growth of a young bitcoin-centric business.

Anonymous Ads is a full bitcoin online advertising platform which does not collect personal data. It has been growing in popularity as demonstrated by its Alexa Traffic Rank – it moved from the top 80K to the top 20K globally. The number of campaigns created and funded has also steadily increased since its inception in 2013. More than 47k ad units were created in 2015. A presentation of Anonymous Ads is available here:  https://a-ads.com/assets/plan-2016.pdf

The founders and shareholders of Anonymous Ads have agreed to allocate 40% of their company shares to Dealcoin unit holders – in a similar manner Dealco unit holders had bought 40% of Dealcoin’s company shares at the time of the listing on Havelock Investments. This allocation assumes a valuation of Anonymous Ads company at approximately 375BTC. The management of Anonymous Ads has agreed to maintain a similar level of monthly dividends as previously paid out to Dealco’s unit holders for at least 6 months following this announcement (January to June 2016). Prior to the end of this period, the management will communicate its future dividend policy to the unit holders. Havelock Investments should proceed with a change of the ticker symbol on the platform to be announced separately.

Prior to the approval of this deal by Havelock Investments, please note that Havelock Investments management has received passport copies and proof of address of each shareholder of the controlling company of Anonymous Ads, Alpha Communication Services Limited and the company documents and registers as part of its due diligence process. I have personally met with the founders and CEO of Anonymous Ads as well.

As the main shareholder of Dealcoin’s controlling company I would like to state that I will not get any shares of Anonymous Ads controlling entity in this process. The balance of bitcoins available in the Dealco fund on the Havelock platform will be used in the future by Anonymous Ads for its daily operations. The Havelock Investments account will be managed by Anonymous Ads CEO, Arsen Gasparian (aka arsenische) who will be in charge to communicate with you and update you regularly of the advertising platform performance and results.

I wish Anonymous Ads the best in its future activities and I hope you will be rewarded with your patience and support with significant dividends and return in the future.

Thank you for investing with Havelock Investments!
https://www.havelockinvestments.com 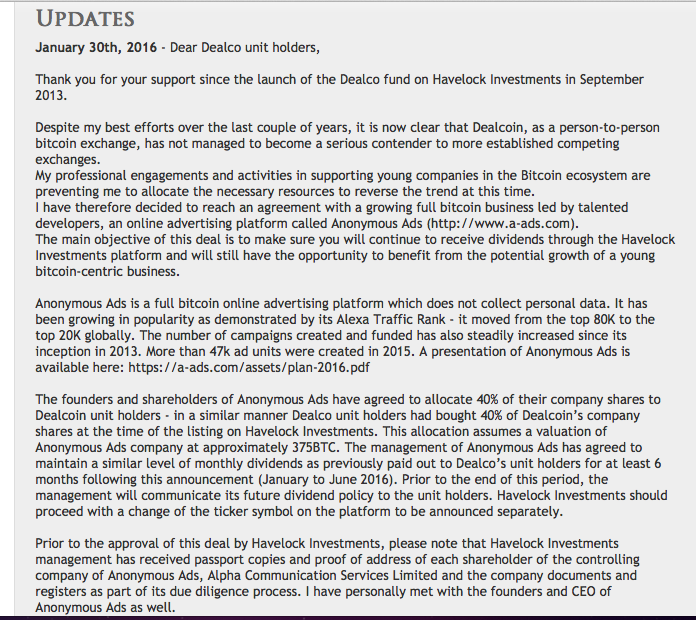