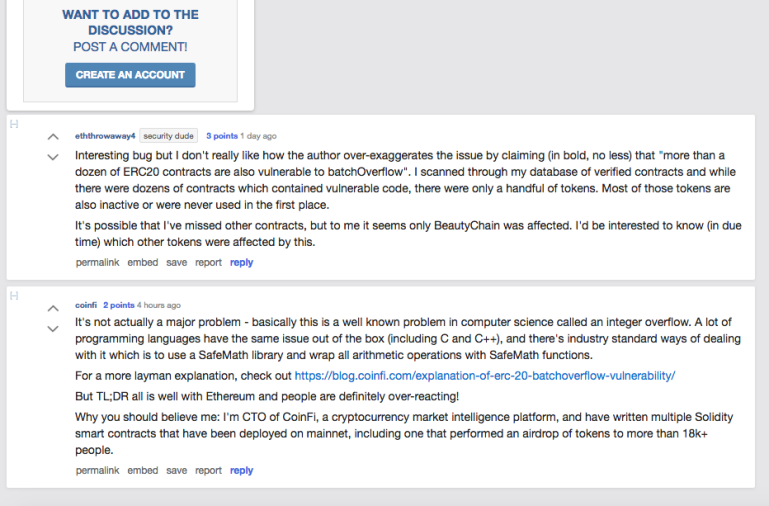 The bigger thing to think about is the fact that most of the top 100 altcoins are not traded on the Ethereum platform, and are not ERC20 tokens, and as a result has very little impact on the non-ethereum based coins.

This may have some impacts on the price of ETH, and as a result, WAVES and EOS will likely pick up some of the slack while the ERC20 contracts are under review.

I wouldn’t worry too much about this bug, personally, unless you were a big ETH holder, then moving into WAVES or BCH or LTC might be a good move.

One way to fix the overflowbatch is to do a reverse check on the sending address to see if it is a fork off the blockchain, and this can be done, and should be done during the confirmation of the transaction process.

That is why it takes so long to send Bitcoin because of all the confirmations that need to occur.

The other thing to do is just see where the deposits are being made, into whose accounts, at the exchange level, and do updates to ensure that things don’t get out of hand.

Or have some way to sync the node so that total supply is always being monitored, even if it means having exchanges get in sync. The reality of the situation is that every transaction contains an element of risk, and god knows how many millions and millions of dollars have been lost due to poor calculating, and of course, begs the question of profitability versus sound construction.

For instance, only 30 years ago we had no cell phones to speak of, and now we have no money to speak of, so hopefully some of these coins come and bear fruit and make some nice wallet deposits to some unexpected people, as this in a way is a form of lottery?